Today on the tray: Wiener schnitzel

Wiener schnitzel, according to Wikipedia, “is a very thin, breaded and deep fried schnitzel made from veal. It belongs to the best known specialties of Viennese cuisine. The Wiener Schnitzel is the national dish of Austria.”

I, for one, cannot hear “schnitzel” without thinking of Julie Andrews singing about “schnitzel with noodles” in The Sound of Music.

Have you ever been to a Wienerschnitzel restaurant? The chain was founded in 1961 in Wilmington, California, and was then known as Der Wienerschnitzel. But if you go there looking for wiener schnitzel, you’ll be sorely disappointed, since it is not on the menu. And to make it more confusing, “Der Wienerschnitzel” isn’t even correct German; it should have been “Das Wienerschnitzel.” Oh, how I wish the world made sense. 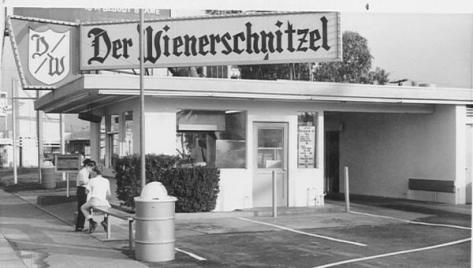 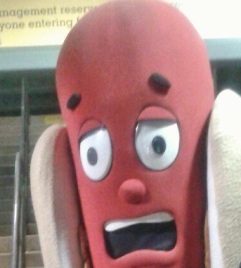 The Delicious One, Wienerschnitzel’s mascot

Below, in a 1977 Der Wienerschnitzel commercial, a family passes by McDonald’s, Burger King, Jack in the Box, and a hot dog stand before ultimately settling on Der Wienerschnitzel, because it has hamburgers and hot dogs (though not wienerschnitzel). We all know the real reason is that the dad doesn’t want to have to turn the car around, but whatever. The commercial has a nice jingle. Sadly it does not feature Wienerschnitzel’s mascot, a hot dog named The Delicious One, who is on Twitter.