Today on the tray: Evil mushrooms

April 16 is Day of the Mushroom (not to be confused with National Mushroom Day—that’s October 15).

Day of the Mushroom sounds like a movie where mushrooms take over the earth, doesn’t it? While there are good mushrooms to be sure, some can be pretty evil. The Amanita phalloides variety, for example, can cause organ failure and death. And then there are Witchiepoo’s evil mushrooms on H.R. Pufnstuf. They can turn you into a mushroom just by touching you.

That’s what happens to Freddy the Flute in the 1969 episode titled “Flute, Book and Candle.” Despite Pufnstuf’s warning (“Don’t anyone touch the evil mushrooms!”) poor Freddy winds up in a patch of the evil talking fungi and is touched. One of the mushrooms is smoking a cigar, so you know he’s evil. What I don’t understand is this: If Freddy can talk, and the mushrooms can talk, and everything else on Living Island can talk—how come Freddy can no longer talk once he becomes a mushroom?

Watch the episode below. Pufnstuf’s warning is at 2:15. Freddy’s mushroom transformation is at 3:17. 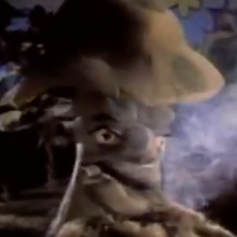 He smokes a cigar… he must be evil! 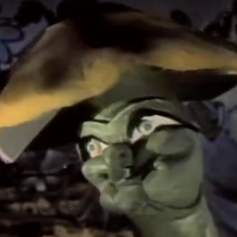 This evil mushroom has a scary face 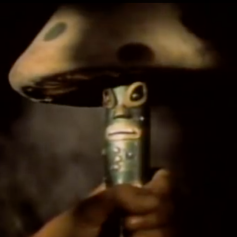 Freddy the Flute as a mushroom