Born on this date: Cloris Leachman

On TV, Leachman is possibly best remembered for playing Phyllis Lindstrom, annoying neighbor to Mary Richards on The Mary Tyler Moore Show and title character of the spinoff series Phyllis. But she’s played quite a variety of other TV roles too. She was the mom on Lassie before June Lockhart assumed the role; she was the mother of the “monster” Anthony in the classic Twilight Zone episode “It’s a Good Life”; she was Beverly Ann, Mrs. Garrett’s sister and unnecessary replacement in the final years of The Facts of Life; and most recently, she was the demented Maw Maw on Raising Hope. 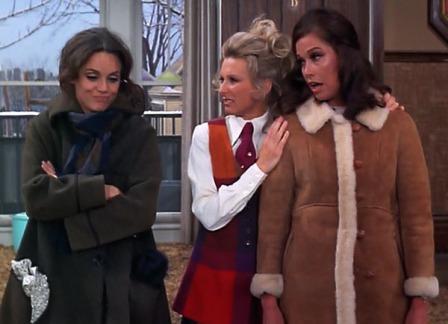 I’ve always loved the opening credits to Phyllis, with the San Francisco scenery, the whimsical music, the carefree shot of Phyllis leaping onto a moving cable car. (I have to believe that on some level, this is responsible for my having moved to San Francisco, though I’ve never attempted the jaunty cable-car leap — too dangerous.) And who can forget the lyrics, which seem to flatter Phyllis but are actually just setting her up for a big putdown at the end?