Born on this date: Ken Berry 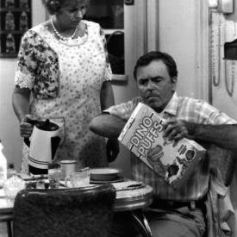 Some of you may remember Berry as young widower Sam Jones on Mayberry, R.F.D. Or as the klutzy Captain Wilton Parmenter on F Troop. Or as nincompoop Vinton Harper on Mama’s Family.

But probably few remember him as the star of the Ken Berry “WOW” Show. This was one of those summer replacement variety shows they used to have in the ’70s. Since it was on during the summer of 1972, I missed it, because I was away at summer camp, getting wedgies and being picked last for baseball.

In the clip below, Berry delivers an opening monologue about the word “wow,” and introduces the cast, including the New Seekers and unknowns Steve Martin, Teri Garr, and Cheryl Stoppelmoor (later Ladd). He then segues into a song and dance number in front of gigantic letters spelling “WOW.”