Bonkers! Bonks you out! 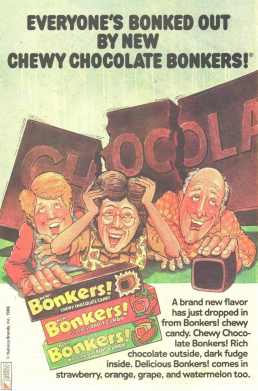 I hope you still have some of your Halloween candy left, because Nov. 4 is National Candy Day.

Says CNN, “Humans have been eating candies and sweet confections easy desserts for thousands of years. The ancient Egyptians preserved nuts and fruits in honey, and the Aztecs and Mayans consumed chocolate during religious rituals as early as 300 AD… Whether you like chocolate, caramels, hard candy, or marzipan, treat yourself to something delicious to celebrate National Candy Day!”

Or, how about treating yourself to getting hit on the head with giant fruit? That’s what the folks do in this commercial for Bonkers. It’s one of a series of commercials for the now-defunct 1980s candy (which Wikipedia reports is being reintroduced into the market). These commercials are a hoot, and not just because people get hit with giant fruit. It’s because of the dour, conservative-looking woman and her deadpan delivery of the lines. Who would expect that such a person would enjoy getting hit by fruit? What else is she hiding?

My research turned up the fact that there is a Facebook community page called Who the hell else remembers the OLD Bonkers candy?

Some folks think Bonkers is gum.
[Bonk on the head with giant fruit]
They know it’s candy now!

So it might be a good idea to wear a helmet today. Happy National Candy Day!