Today on the tray: Jell-O, Chipmunks and Channing 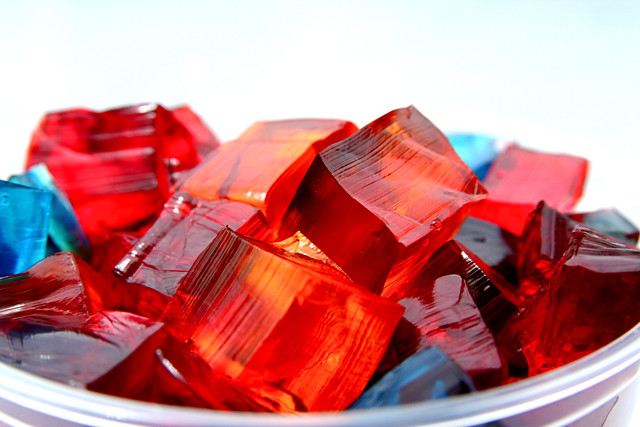 The second full week of February is National Jell-O Week. It was officially declared as such by the Utah State Legislature in 2001. Can a state declare a national holiday? That doesn’t sound right to me. But I have no objection to celebrating the wonder of Jell-O.

Here some vintage ads starring some of our favorite celebrities! And some not-so-favorite.

First up: The Fifth Dimension sings a catchy pop jingle standing atop a giant box of Jell-O. Clearly they have better balance and less fear of heights than I have. They tout Jell-O as “The Light Snack.” I guess it won’t weigh you down when you go Up, Up and Away in your beautiful balloon.

Next: Those lovable Chipmunks, Alvin, Simon, and Theodore, sing the “What’s for Dessert? Jell-O” song.

Jell-O, Jell-O, time for fun, lots of fun for everyone. Wiggle, wobble, shiny, bright! Let’s have Jell-O every night!

And finally, characters from Hogan’s Heroes promote Jell-O—and for some reason, Carol Channing is there playing herself, and she doesn’t do anything. She doesn’t even eat the Jell-O or sing. And what’s with Nazis eating Jell-O? Is that supposed to humanize them? They like the same desserts we do, so maybe they’re not so bad? Sorry, I just can’t with this show. As a kid, whenever I heard the opening seconds of the theme song of this show, I would change the channel.

Since Carol Channing doesn’t sing in the commercial, I’ve written the song she should have sung. Lyrics by Michael’s TV Tray (copyright 2020), music by Jerry Herman.

Hello, Jell-O, well hello, Jell-O
Something wiggly and delicious can’t be wrong
You’re light and sweet, Jell-O
Such a treat, Jell-O
Whether in a bowl or in a mold, you sure belong 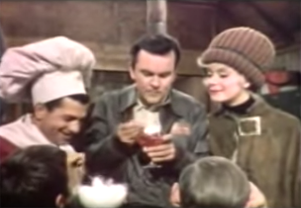 I see the gel wobbling
And the folks gobbling
Just the same as they did in the days back when…
Oh, dance and shake, Jell-O
I’m gonna go and make Jell-O
Jell-O will never be the same again!

Have a happy National Jell-O week!