Today on the tray: Croissants and Dr. Beverly Crusher 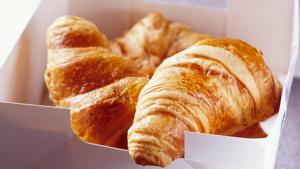 Although it is most likely just a myth, the history of the croissant is a colorful tale full of adventure. In 1683, the Turkish Empire laid siege on Vienna, Austria. The Turks made several attempts to enter the city by force, but were unsuccessful, so decided to dig an underground tunnel. The bakers of Vienna, who worked in the basement storerooms, heard the sound of digging and alerted the army. The bakers received high honors and thanks for their assistance in outwitting the Turks. In celebration, they baked their bread in the shape of a crescent moon—the symbol of the Ottoman Empire. After the Turks were defeated, it became custom to serve morning coffee with the crescent-shaped pastry!

Sara Lee: The Next Generation

This 1984 Sara Lee croissant commercial stars Gates McFadden, who would one day play Dr. Beverly Crusher on Star Trek: The Next Generation. The future USS Enterprise physician puts on a French accent and insists that only the French can make a true croissant. After tasting it, she concludes, “This Sara Lee—she is French, non?”

If you were hoping to see Dr. Beverly Crusher in the much-anticipated new Star Trek: Picard series on CBS All Access, you’ll be disappointed — she is not among the Star Trek: TNG characters who have been announced to return.

For those non-Star Trek fans among you: Beverly Crusher was the ship’s doctor in six of Star Trek: TNG‘s seven seasons. The character was popular among viewers for her warmth, intelligence, and beauty. She was absent for Season Two and was replaced by Dr. Katherine Pulaski, played by Diana Muldaur. Mulaur had appeared in two memorable episodes of the original Star Trek series in two different roles, and I loved her in those, but in TNG she left me cold. I don’t know any TNG fan who preferred Dr. Pulaski to Dr. Crusher. No one crushes the Crusher! If you disagree, feel free to make your case in the comments.

I was going to say that Beverly Crusher never ate a croissant on the show, but then I fact-checked, and she did! Frequently, apparently! I guess I wasn’t paying attention. According to Memory Alpha:

In 2368, Captain Jean-Luc Picard and Doctor Beverly Crusher ate croissants for breakfast while they discussed the empathic metamorph, Kamala. (TNG: “The Perfect Mate“)

In 2370, Picard and Crusher agreed on coffee and croissants for breakfast everyday while they were linked together by the psi-wave device on the planet Kesprytt III. (TNG: “Attached“)

You really can find out anything on the Internet — at least anything about Star Trek.

Au revoir, and have a joyeaux National Croissant Day!