Just sit right back and you’ll hear a tale 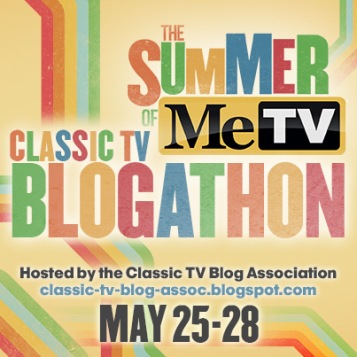 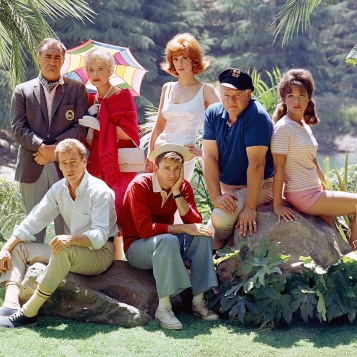 When I decided to write about Gilligan’s Island for the Summer of MeTV Classic TV Blogathon, I wondered what I could say about the show that hasn’t already been said. After all, more people know the words to the Gilligan’s Island theme song than can name the vice president of the United States. (I just made that up, but I’m sure it’s true.) So I’m skipping the basics that everyone knows—the series premise, the characters—and going straight to fun facts and favorite moments.

Did you know that the pilot (which wasn’t televised until 1992) had a completely different opening theme from the one we all know and love? That’s right, instead of singing “Just sit right back and you’ll hear a tale, a tale of a fateful trip…” we might have been singing this calypso song, which, I think, is also very catchy.

Just imagine how different our world would be had the pilot remained unchanged. We’d have had a different Professor, a different Ginger, and a character named Bunny instead of Mary Ann. Also, there’d have been no movie star; this Ginger was a secretary. Their tour was twice as long—six hours instead of three—but still too short to justify all the clothing and other stuff the Howells brought with them. And I guess that instead of debating the relative attractiveness of Ginger and Mary Ann, people would be asking “Ginger or Bunny?” 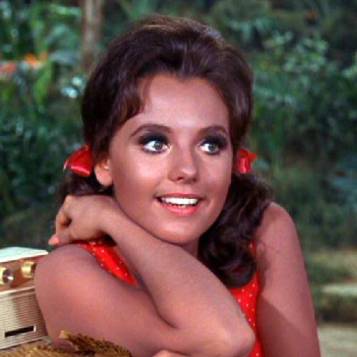 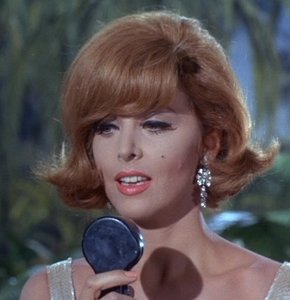 Arguing whether Mary Ann or Ginger is more desirable has become a popular pastime—mostly among straight men. It boils down to whether you prefer a wholesome girl-next-door type or a seductive glamour girl. Is this question just the sitcom version of the Madonna-whore dichotomy? If you’re into guys, there’s no equivalent debate; no one asks, “Gilligan or the Professor?” It could be that the show’s male actors aren’t subject to the same kind of objectification because they aren’t as attractive, but I find the Professor sort of appealing now that I’m an adult. Really, though, isn’t the whole discussion a bit ironic when you consider that we’re talking about an island where no one had sex? 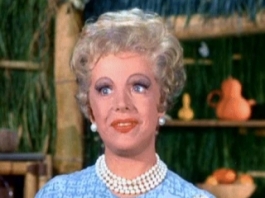 As a mature married woman, Mrs. Howell always gets left out of the hotness debate, but in the episode “Beauty is as Beauty Does,” she gets equal consideration as a contestant in the Miss Castaway pageant along with Ginger and Mary Ann. With Mr. Howell backing his wife, the Skipper backing Ginger, and the Professor backing Mary Ann, Gilligan gets to cast the sole vote—and casts it for an ape named Gladys. (Gladys, incidentally, is played by a male actor and stuntman named Janos Prohaska.)

Another occasion where Mrs. Howell gets to be “one of the girls” is when she joins Mary Ann and Ginger as a singer in a girl group called the Honeybees, in the episode “Don’t Bug the Mosquitoes.” You see, a rock group named the Mosquitoes lands on the island, and the castaways think that by forming their own band, they will encourage the Mosquitoes to take them back to civilization. The male castaways form a band that sucks, but then the women show their talent as the Honeybees, singing an original song, “You Need Me.” Did you miss it? Don’t worry, you can see the classic performance below. Mary Ann’s voice is dubbed. (Oh, and naturally, the idea backfires: The Mosquitoes leave them behind, convinced the Honeybees would be too much competition.) 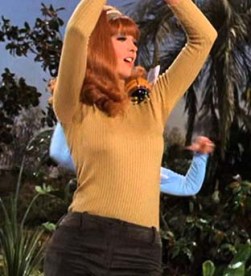 GINGER:
You need me—you need me.
Like a picture needs a star.
Like a golfer needs a par.
Like teenagers need a car.
You need me.

MARY ANN:
You need me—you need me.
Like a baby needs a toy.
Like Hawaiians need their poi.
Like a girl needs a boy.
You need me. 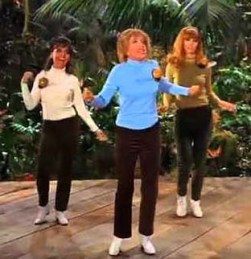 ALL:
You need us—you need us.
Like a bee needs a buzz.
Like a peach needs its fuzz.
So that’s why you need us.
Buzzzzz.

The Mosquitoes were my downfall one time in a Gilligan’s Island trivia incident. I was at a social gathering where I happened to hear another guest boasting of his Gilligan’s Island trivia expertise. Confident that I had superior knowledge, I challenged him to a contest. And he stumped me right out of the gate with this question: What were the names of the four Mosquitoes? I will tell you the answer now, so that this never happens to you: Bingo, Bango, Bongo, and Irving. I do think I deserve some credit for having known that three of the Mosquitoes were played by the Wellingtons, which is the trio that sings the theme song in Season 1.

Speaking of trivia and character’s names, do you know the real names of the Skipper, the Professor, and Gilligan? Yeah, they have names: Jonas Grumby, Roy Hinkley, and Willy Gilligan, respectively. Gilligan’s first name is never actually mentioned in the series, and most viewers must assume that Gilligan is his first name, but according to series creator Sherwood Schwartz, it’s Willy.

By the way, Bob Denver was not the first actor approached to play Gilligan. That distinction goes to Jerry Van Dyke, who turned down the role. Who knows why? Maybe he thought the premise of the show was too absurd. Instead he chose to star in My Mother the Car. 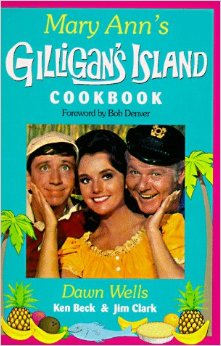 How about some coconut cream pie?

And what good is a pie if it doesn’t get thrown in someone’s face? Someone did us the favor of editing together various Gilligan’s Island pie-in-face clips.

Pies in faces on Gilligan’s Island

Dawn Wells isn’t the only one who published a Gilligan’s Island book; Bob Denver (Gilligan), Russell Johnson (the Professor) and Sherwood Schwartz also shared their stories. Denver’s book is Gilligan, Maynard & Me; Johnson’s is Here on Gilligan’s Isle; and Schwartz’s is Inside Gilligan’s Island: From Creation to Syndication.

The actors also share reminiscences in the 2001 docudrama Surviving Gilligan’s Island. It’s primarily from Wells’s point-of-view, but Denver and Johnson appear too. The docudrama is as cute as Wells herself, and it’s fun to see the behind-the-scenes drama reenacted by other performers. Wells is seen baking coconut cream pies when she interrupts the action to narrate. The full movie is on YouTube.

One thing that all the accounts have in common is that they uniformly portray Tina Louise (Ginger) as temperamental. Reportedly, she was under the impression when she signed on that she would be the star of a series about a movie star stranded on a desert island “along with some others.” Sherwood Schwartz has suggested in interviews that she might have gotten a clue from the name of the series.

Louise also has stated the series caused her to be typecast and ruined her career as a serious actress. She is the only cast member who didn’t participate in the three TV movies. (More on those later.) The same year she declined to return as Ginger in Rescue from Gilligan’s Island, Louise took on the serious, dramatic role of a former sitcom star cursed with damp armpits. Yes, she played herself in a series of ads for Arrid Extra-Dry.

I snark, but Louise actually did give a great post-Gilligan performance as Charmaine, the tennis-loving trophy wife in The Stepford Wives. And she was a good enough sport to reunite with castmates Bob Denver, Dawn Wells, and Russell Johnson in a 1995 episode of Roseanne. (Roseanne must have been very powerful at that time to be able to make that happen.) In the closing tag, the Gilligan’s Island actors take on Roseanne roles that play against their Gilligan types: Tina Louise plays the decidedly unglamorous Roseanne, Dawn Wells plays surly Darlene, Russell Johnson plays dumb Mark, and Bob Denver plays Jackie—in drag.

Getting off the island—and off the planet 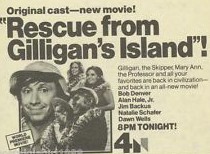 The second half of The Castaways on Gilligan’s Island sets the stage for what might have become a Fantasy Island copycat series. It even has Fantasy Island-type guest stars (Marcia Wallace and Tom Bosley). The Howells finance the transformation of the island into a resort, and all the other castaways work there—because why wouldn’t they want to spend the rest of their lives on the island they tried so hard to leave? And from whom did the Howells buy the property anyway? Did they steal it from the native headhunters who used to show up occasionally in the original series? What government has sovereignty over the island? Well, we’re not supposed to ask these questions, any more than we were supposed to ask why the Professor couldn’t build a boat in the original series. 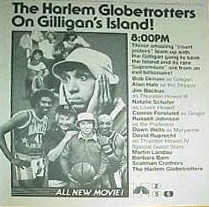 The Harlem Globetrotters on Gilligan’s Island continues the Fantasy Island format with Globetrotters appearing as themselves, and Barbara Bain and Martin Landau playing the movie’s villains. Jim Backus was at this point too ill to appear as Mr. Howell for more than one scene. Instead, we’ve got the Howells’ son, Thurston Howell IV, whom they missed so much that they never even mentioned him when they were shipwrecked.

You can watch all three TV movies on YouTube, at least until they get yanked down for copyright infringement. By the way, Ginger is played by Judith Baldwin in the first two movies and Constance Forslund in the third.

But wait, there’s more! The 1982-83 animated series Gilligan’s Planet takes the castaways and strands them on another planet! Find out how it happens in the opening credits:

All the original cast lend their voices except, of course, Tina Louise. Dawn Wells voices both Mary Ann and Ginger, which truly renders the Ginger vs. Mary Ann debate moot, at least if you’re a cartoon character. But what’s up with animated Ginger having blonde hair? Supposedly, it was done to avoid trouble with Tina Louise, but it just seems wrong. Everyone knows gingers are redheads. Not only that, by this time, two other redheads had played Ginger in the TV movies, so I don’t get it.

Well, that about it wraps it up. I hope you’ve enjoyed this entry in the Summer of MeTV Classic TV Blogathon. Gilligan’s Island airs on MeTV’s summer schedule seven days a week.

This post is part of MeTV’s Summer of Classic TV Blogathon hosted by the Classic TV Blog Association. Go to classic-tv-blog-assoc.blogspot.com to view more posts in this blogathon. You can also go to metvnetwork.com to learn more about MeTV and view its summer line-up of classic TV shows.