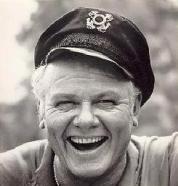 The Skipper’s seldom-mentioned name was Jonas Grumby. Below see Hale as the Skipper as Polonius performing “Neither a Borrower Nor a Lender Be” in a musical production of Hamlet staged by the castaways. (That’s Mary Ann in boy drag as Laertes.)