Today on the tray: TV dinners

Who came up with the nifty idea of TV dinners, anyway? Well, several different parties lay claim to the invention. Swanson & Sons is credited with coming up with the term “TV dinner.” A popular story is that Swanson & Sons had 260 tons of unsold frozen Thanksgiving turkey on their hands one year, and one of their executives, inspired by airline meals, came up with the idea of packaging and selling the excess turkey as as part of a frozen dinner. This was in 1954. Quaker State Foods was already selling frozen dinners in aluminum trays in 1949, but Swanson was the first to enjoy widespread success with the frozen dinner concept.

In 1973, Swanson introduced its larger-portioned Hungry-Man Dinners. Below, a pre-Taxi, pre-Grease Jeff Conaway stars as a hungry man in an early commercial for the new, larger meal. 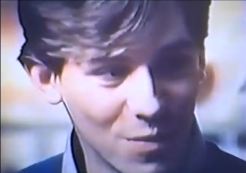 It’s the next best thing to your good cooking. Swanson makes it good!