Today on the tray: Chocolate pudding

According to the holiday site Punchbowl, dessert puddings date back to the 17th century. “During that time, a ‘pudding’ was actually a very moist cake… The sweet and creamy confection we know and love today emerged in the mid-19th century when an English chemist named Alfred Bird developed an egg-free custard powder. This remarkable invention made it very easy to produce a delicious pudding with the perfect consistency.” 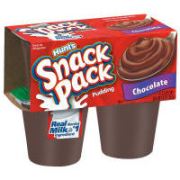 But more than a century would pass before people could buy it in little plastic cups. Snack Pack claims to have been the first to package shelf-stable pudding in individual plastic cups, switching in 1984 from the aluminum cans they had been using since 1968.

Check out this vintage Snack Pack commercial with Melissa Gilbert. Even though the ad pre-dates Little House, Gilbert already looks like Half-Pint, hanging out at the swimming hole. (That’s a different kid in the preview image.)

Just because Half-Pint eats Snack Pack doesn’t necessarily mean it’s the best brand. The folks at SeriousEats.com conducted a taste test of nine leading brands of pre-made pudding cups. They judged them on sweetness, chocolate flavor, and overall preference. Here’s how they ranked them, from best to worst: Trader Joe’s, Jell-O, Swiss Miss, Shop-Rite, Kozy Shack, and Snack Pack. Then there were three that weren’t ranked, just ruled out entirely for being inedible: Kozy Shack All-Natural CowRageous!, SoyJoy, and White Rose. Read more about their methods and findings here.

In my family, we didn’t fuss with little cans or cups. We ate Cool ’n Creamy, a frozen pudding from Birds Eye that came in a big tub. I loved me some Cool ’n Creamy. In this commercial, a guy who looks like a 1960s version of Paul Rudd experiences sensory distortions after eating Cool ’n Creamy.

Finally, I couldn’t very well write about pudding without mentioning the pudding king himself, Bill Cosby. Cosby is synoymous with Jell-O Pudding, having served as the product’s spokesperson from 1974 to 1999. Sadly, he’s better known for something else now.

Below, Bill Cosby joins forces with “Sarah Tucker” of Tucker Inn, where they’re never without Cool Whip. (Sarah Tucker is played by Marge Redmond, who was Sister Jacqueline on The Flying Nun.) In this commercial, Cool Whip and Jello-O Pudding form an unholy alliance to make Pudding in a Cloud, which sounds either heavenly or abominable, depending on whether you like artificial, processed food or the kind that comes from nature. It’s essentially a cup of Cool Whip with a blob of chocolate pudding in the middle.