Cowsills: Milk is the lift that lasts!

January 11 is Milk Day, commemorating the date in 1878 when milk is believed to have been delivered in bottles for the first time.

In 1967-68, the American Dairy Association used the Cowsills in its ad campaigns for milk. The Cowsills were a family band that later served as the inspiration for The Partridge Family. Their hits included “The Rain, the Park, and Other Things,” “Indian Lake,” and “Hair.” 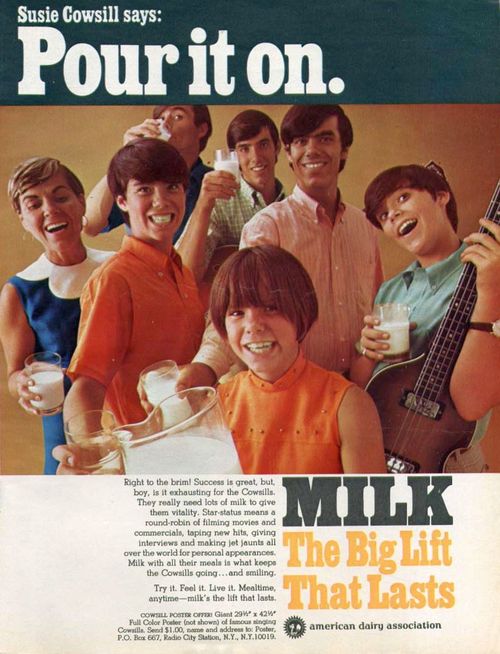 The campaign also included a radio commercial featuring “The Milk Song.” Below, listen to the harmonies of the Cowsill family as they testify to the grooviness of milk:

When you find that you’re running down slowly
And you need a lift that will last
There’s something that you should be knowing
So listen start filling your glass
(We found a quick and easy way to keep you going through the day!)

So wake up!
To a milk day
Guaranteed to move you
In a good way
One that’s sure to groove you

So get the lift that lasts!
Wake up! Hey!

Milk in the morning’s refreshing
At lunchtime it’s such a delight
And if you’ve a thirst that needs quenching
Milk anytime is all right
(Morning, noon, night or in between, it’s really outta sight!)

You better wake up!
To a milk day
One that’s sure to move you
In a fun way
One that’ll really groove you
Milk is the lift that lasts (and lasts and lasts)!

So have a happy Milk Day and get the lift that lasts!