Today on the tray: Fluffernutters (and A Very Brady Surprise)

Here is the fascinating story of the Fluffernutter, courtesy of Wikipedia: 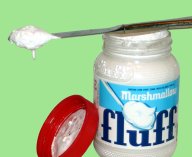 A Fluffernutter is a sandwich made with peanut butter and marshmallow creme, usually served on white bread. Variations of the sandwich include the substitution of wheat bread and the addition of various sweet, salty and savory ingredients. The term fluffernutter can also be used to describe other food items, primarily desserts, that incorporate peanut butter and marshmallow creme.

Meanwhile, Query sold his recipe to Durkee-Mower Inc., who renamed it Marshmallow Fluff and continues to sell it under that name today. The term Fluffernutter was created in 1960 by an advertising agency hired by Durkee-Mower to find a more effective way to market the peanut butter and marshmallow sandwich.

In Somerville, Mass., the birthplace of marshmallow creme (and a city in which I once resided), they held their 8th annual “What the Fluff?“ Festival just a few weeks ago. I’m kind of annoyed that they waited until after I moved to the West Coast to start having this event.

If you’ve never been to it, here’s a taste of a previous year’s festival, including costumes, Fluff Bowling, the “Fluff Hair Salon,” and an appearance by “The Flufferettes.”

Scenes from the 2007 “What the Fluff?” Festival

At the 2011 festival, one of the attractions was Susan Olsen, aka Cindy from The Brady Bunch, who is now an artist and was selling her artwork (some of which includes Fluff). Also present at the festival was Geri Reischl, aka “Fake Jan” from The Brady Bunch Hour.

At the 8:40 mark in the video below, you can see Mayor Curtatone of Somerville present Olsen with an Honorary Fluff Chef hat. At 9:45, Olsen discusses Somerville and Fluff, and reveals that, in fact, her nickname is Fluff. You can see Fake Jan at 10:50.

My research for this post turned up the interesting fact that Olsen created something with Fluff called Candy Kitten Crap and sold it at a benefit for a nonprofit animal rescue organization called Precious Paws. See the Candy Kitten Crap here. And here’s the irony: The Bradys had a cat in the pilot episode that was never referred to again. The cat’s name? Fluffy.

And finally, folks, here’s what you’ve all been waiting for—the Fluffernutter song:

When you enjoy, joy, joy
Your Fluff and peanut butter
You’re glad you have enough
For another Fluffernutter!