According to Punchbowl, “On this day in 1789, the United States Congress approved an Act ‘for the establishment and support of lighthouses, beacons, buoys, and public piers.’ This piece of legislation commissioned the first Federal lighthouse, which was constructed at the entrance of Chesapeake Bay. Two hundred years later, Congress designated August 7th as National Lighthouse Day to commemorate this important moment in history and to celebrate these beautiful structures.”

So what do lighthouses have to do with the theme of this blog, classic TV? Well, it’s a stretch, but here’s a clip of Edison Lighthouse performing “Love Grows (Where My Rosemary Goes)” on the BBC TV show Top of the Pops.

Edison Lighthouse, “Love Grows (Where My Rosemary Goes),” Top of the Pops (1970)

Edison Lighthouse was named after the Eddystone Lighthouse off the coast of Cornwall—not after Thomas Alva Edison like I always thought. I guess they would have been named Edison Light Bulb in that case. “Love Grows” was the group’s only hit. I wonder if rosemary also grows where Rosemary goes? That would be a much more practical crop than love, albeit less poetic. 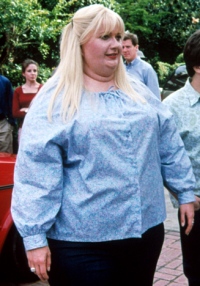 The song was used in the soundtrack of the 2001 film Shallow Hal, which makes me wonder if they named Gwyneth Paltrow’s character Rosemary just so they could use that song. This was the movie where she donned a fat suit for the role, and then gave interviews about how when she went out in public wearing the suit, she got treated in a way that opened her eyes to what fat people endure. I have to think that people were staring because she was Gwyneth Paltrow in a fat suit, not because they thought she was a real fat woman. The suit wasn’t very convincing. Also, I doubt that the fat-phobic stares could have made that much of an impact on her self-esteem, knowing she could peel off the fat suit and be Gwyneth Paltrow again.

What was the topic of this post again? Oh yeah, lighthouses. Have a happy National Lighthouse Day!