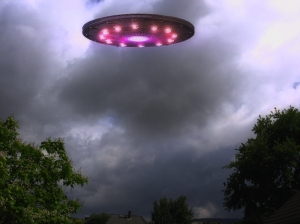 “There are many ways to be aware of this day, like watching UFO movies or talking with your friends about the possibility of UFOs or alien life,” says WorldUFODay.com.

I’m going to celebrate by remembering the UFO/flying saucer incidents on two classic shows: The Brady Bunch and Bewitched.

On The Brady Bunch, Greg tricks Peter and Bobby into thinking there is a UFO hovering in the sky above their astro-turf backyard. Greg does this to get back at his brothers for telling their parents that he got in late Saturday night. Greg’s an asshole.

In the clip below, Peter and Bobby camp out in the backyard hoping the UFO will return so they can catch it on film. Meanwhile, Greg explains to Marcia how he strung up fishing line, hung a clear plastic curtain over it, and then used a flashlight and a whistle to create the illusion of a UFO. Greg looks like a dork with a band-aid on his lip because in real life, Barry Williams had busted his lip in a car accident.

What’s really memorable about this episode is Bobby’s dream. Bobby was always the Brady kid with the interesting dreams—like when he dreamed he played football with Joe Namath or saw Jesse James hold up a train. Excited by all the UFO buzz, Bobby dreams that a UFO lands in his backyard. Out step two diminutive aliens who announce that they are from the planet Kaplutis. “One small step for spacemen, one giant step for Kaplutians,” says one. (The little people playing the Kaplutians are actually the stand-ins used for Mike Lookinland and Susan Olsen on the show.) The visitors offer to take Bobby back to see Kaplutis, and nitwit Bobby readily climbs aboard the spaceship, which is labeled “U.F.O.”

Ultimately, the police get called in, and Greg is forced to admit the UFO in the backyard is a hoax. And then Greg gets grounded. What, not even a fine, or some jail time? Richard Heene, the guy who orchestrated the Balloon Boy hoax, got a 90-day jail sentence and had to pay $36,000. I’m just saying.

On Bewitched, the aliens are not little people. They’re dog-people from the planet Parenthia who are brought to the Stephens’s residence when Aunt Clara accidentally zaps Tabitha’s toy flying saucer into a real one. Then Mrs. Kravitz sees the dog-aliens and…  yadda yadda, if you’ve ever seen a single episode of Bewitched, you know exactly what happens. But it’s still funny. Isn’t the poodle alien cute? 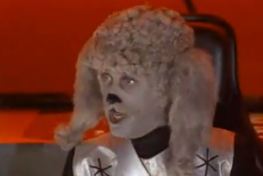 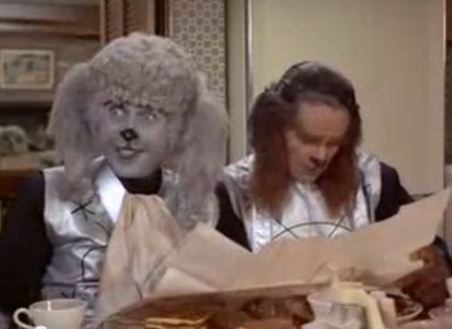 Below, see Aunt Clara conjure up the flying saucer at the 2:24 mark. Then get your first glimpse of the dog aliens at 3:30. Be careful though—they have N-guns. The “N” stands for “niceness”; they make people behave nicely. I like that idea quite a lot.

So, which are the better aliens? The Kaplutians on The Brady Bunch or the dog-people on Bewitched? And who has the better spaceship? Discuss.