Welcome to the Valerie Harper Blogathon! Earlier this month, Harper announced that she has terminal brain cancer. In recognition of her life and career, a group of bloggers are participating in a blogathon. For my entry, I’m sticking to basics and writing about Rhoda, the iconic character Harper portrayed on The Mary Tyler Moore Show and its spinoff, Rhoda.

A true story: The plane

I’m buckled into my seat on a plane at the Newark airport, waiting for takeoff. We’ve been stuck on out on the tarmac for two or three hours, delayed because of ice. Since it is only a one-hour flight to Boston, few passengers thought to bring food; now it’s dinnertime and people are hungry and grouchy and anxious to get where they’re going.

Though I am in Economy Class, I can see into First Class, because I’m just on the other side of the little dividing curtain, which is open. I notice someone a few rows ahead who looks familiar. It’s Valerie Harper! Somehow, I am comforted by the thought that “Rhoda” is suffering along with me. It’s like I have a friend on the plane sharing my misery (albeit one who is traveling First Class while I’m in coach).

Everybody wishes they had a friend like Rhoda—funny, supportive, there when you need her, and conveniently close by (but in her own apartment).

Once you got to know her, Rhoda was genuine and thoughtful despite her sometimes tough exterior. Remember when she invited Henry Winkler to Mary’s dinner party because he had been fired from Hempel’s earlier that day? Who else would do that for a co-worker—and then even give him half her portion of Veal Prince Orloff?

I asked some of my friends and family why the Rhoda character appealed to them. They cited her witty comebacks, her groovy clothing and apartment, her challenging relationship with her mother, and the humor with which she dealt with her unsuccessful dating.

To me and many others, the fact that she was less “perfect” than Mary made her the more relatable character. Rhoda even poked gentle fun at Mary’s perfection — remember how she tried to make Mary feel guilty for having been head cheerleader in high school? The ability to induce guilt was no doubt a talent Rhoda inherited from her mother.

Rhoda’s candor and self-deprecating humor are reflected in the Season 1 opening credits for Rhoda, in which she faces us straight on, introduces herself, and offers up a short autobiography, including her love of food and her “bad puberty.”

Watching Mary Tyler Moore as a Jewish kid in the ’70s, I was very conscious of the fact that Rhoda was one of a very few Jewish characters on TV, and maybe the only one whose Jewishness was openly acknowledged and discussed. It’s hard to believe, but this truly was rare at that time. (Curiously, once Rhoda became the main character in her own series, the there was much less emphasis on the fact that she was Jewish.)

Some critics argue that Rhoda presented a negative Jewish stereotype—sardonic, insecure, food-obsessed—but I reject that notion. The fact is, she did remind me of my own Jewish family and friends, but in a positive way, because of her directness and humor. She was convincing enough that I remember being very surprised to find out that Valerie Harper wasn’t Jewish in real life.

Rhoda’s Jewishness was a main plot point in the episode titled  “Some of My Best Friends are Rhoda.” In it, Mary has a new friend, Joanne, and the two start spending a lot of time together playing tennis at Joanne’s club. Joanne keeps coming up with excuses for excluding Rhoda. Finally, Mary asks her why she doesn’t want Rhoda along with them, and the truth comes out: The club doesn’t allow Jews. Joanne swears that she personally has no problem with Jewish people, but Mary exposes Joanne’s bigotry by pretending that she, Mary, is Jewish. 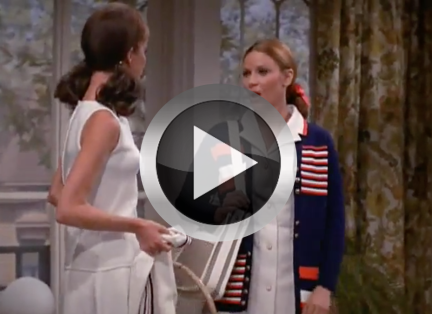 At the 20-minute mark, Mary confronts an anti-Semitic friend in “Some of My Best Friends Are Rhoda,” The Mary Tyler Moore Show (Feb. 26,1972)

Another first: Rhoda utters the word “gay” on TV

Harper recalls that Rhoda was involved in another television milestone: She was one of the first to use the word “gay” on a sitcom. Maybe you remember the episode: Phyllis’s brother Ben comes to town, and Phyllis is intent on setting him up with Mary. But to Phyllis’s chagrin, he prefers Rhoda’s company, and the two start spending time together. Phyllis’s distress builds until, at a party at Mary’s, she begins sobbing, convinced that her brother and Rhoda are about to be married. Finally, Rhoda explains that she and Ben are just friends—he’s not her type. Phyllis is incredulous. “What do you mean he’s not your type?! He is witty! He is attractive! He is successful! He’s single!” And Rhoda says, “He’s gay.” The audience roars as this registers on Phyllis’s face. Then Phyllis throws her arms around Rhoda and says, “Oh, Rhoda! I’m so relieved!”

In an interview in The Advocate, Harper says, “Do you know, when I said that line ‘He’s gay,’ we got the biggest laugh ever on the show? I mean, this was the ’70s, long before Will & Grace or Ellen; there really weren’t gay characters on television back then. The ­audience laughed and cheered for over a minute. They had to take most of the audience response out for the broadcast cut. It was amazing. That was an extremely well-written episode—we were blessed with brilliant writing on that show.”

Valerie Harper talks about the “He’s gay” line, with Cloris Leachman on The Doctors (March 11, 2013)

Though the character was groundbreaking, that’s not the real reason why Rhoda remains memorable today. She endures because she was so three-dimensional and recognizable as someone we knew. Harper and her acting talent made Rhoda a person we cared about, laughed with, and rooted for—just as Harper’s many fans are rooting for her now.

Be sure to check out the other Valerie Harper Blogathon posts.