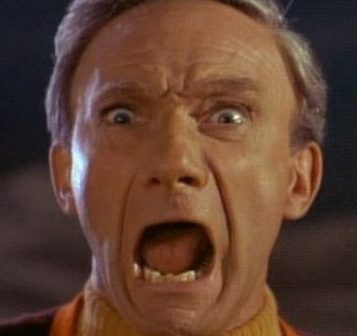 Getting lost in space with the complex Dr. Smith

On October 16, 1997 (aka “the future” on the actual air date of September 15, 1965), the Robinson family took off in the Jupiter 2 on an exploratory mission to a planet orbiting Alpha Centauri—a world that could possibly support human life and relieve Earth’s desperate overpopulation problem. They were selected for the mission out of two million volunteers. Joining them was Major Don West to pilot their vessel.

Unbeknownst to them, Dr. Zachary Smith boarded the ship in order to reprogram their robot to sabotage the control systems. When he failed to exit the ship before it took off, Dr. Smith became “The Reluctant Stowaway,” as the first episode of  Lost in Space is titled. Because of Dr. Smith’s additional weight, the ship veered off course and was pelted by meteoroids. Then the Robot began to carry out Dr. Smith’s destructive programming, causing the Jupiter 2 to get lost… in… space!

Dr. Smith changes it up

Dr. Smith was a catalyst for change in the series right from the get-go. The original unaired pilot for Lost in Space had no Dr. Smith and no Robot—the two were added to the first broadcast episode after CBS suggested that the Robinsons needed a foil.

Then, early in the first season, Dr. Smith began to transition from a standard-issue evil villain into more of a bumbling bad guy. Dr. Smith’s portrayer, Jonathan Harris, was initially worried that as a straight-up villain, his character was likely to be killed off soon. It was Harris’s idea to imbue the character with comical traits and mannerisms, and series creator Irwin Allen gave his blessing. In fact, Harris rewrote much of Dr. Smith’s dialogue and came up with the character’s famous insults himself. Thus, the cold, calculating Dr. Smith developed into the fey, effete coward we came to know, with his rubbery facial expressions and memorable whine, “Oh, the pain, the pain of it all!”

Soon, Dr. Smith and the Robot were pushed to the center of the series. The tone of the show began to shift from serious sci-fi to lighter fare. The second-season change from black and white to color also made it feel less dark. By the third and final season, the show was almost as campy as Batman, which was also on TV at the time.

To really appreciate the evolution of the show, watch the first episode back-to-back with the penultimate episode, “The Great Vegetable Rebellion.” The latter is often panned as the worst episode of the series (though I love camp, so it’s one of my favorites). In that episode, a giant, talking carrot wants to transform all the characters into plants and succeeds in transforming Dr. Smith into a stalk of celery. (Spoiler alert: He gets changed back.) June Lockhart and Guy Williams (Maureen and John Robinson) were laughing so hard during the filming that they were disciplined by being excluded from the next two episodes shot—at full pay, since they had contracts.

Dr. Smith as a stalk of celery

The word that best describes Dr. Smith’s relationship with the other characters is “complicated.” Yes, he begins the series trying to kill them (or at least strand them), and he’s always willing to sell them out to the alien of the week, either for riches or for the promise of a return to Earth. And yes, Major West would tear him limb-from-limb given half a chance. But Dr. Smith also shows that he cares about the Robinsons in his own flawed, selfish way.

The same Dr. Smith who hands Will over to aliens so they can use his brain as a computer (“Invaders from the Fifth Dimension”) is grief-stricken when his negligence results in Will being turned into an android with Dr. Smith’s likeness (“Space Destructors”). And Dr. Smith weeps for Penny, when, having gained a Midas-like touch, he accidentally turns her to platinum (“All That Giltters”). At such moments, he does appear to have feelings for the family, though there is plenty of self-pity mixed in with his remorse.

For their part, the Robinsons certainly show Dr. Smith more compassion than he deserves. Despite his obvious unsuitability as a guardian, Maureen and John Robinson let Dr. Smith spend quite a lot of time with their young, impressionable son, whom Dr. Smith calls, “William, my boy!” Over the years, many comics have mined the unusual… um, closeness… of the Will-Dr. Smith relationship for laughs.

The relationship between Dr. Smith and the Robot is central to the show—after all, the series begins with Dr. Smith trying to use the Robot for his own nefarious purposes. But the Robot provides the perfect foil for him.

Harris said in an interview, “I decided [the Robot] was my alter ego and he was wise to me, and a danger to me… [I was] always calling him those dreadful alliteratives to keep him down so he wouldn’t expose me.”

Dr. Smith abuses the Robot with an impressive array of alliterative insults. Here’s a list of them, followed by the number of times they were used. They span the alphabet from “addlepated amateur” to “wobbling weakling” (no Y or Z insults), but “bubble-headed booby” was used most frequently (nine times).

Of course, the insults wouldn’t have quite the same bite if they weren’t delivered in that supercilious accent. So would it surprise you to learn that Jonathan Harris was born Jonathan Daniel Charasuchin and grew up in a tenement in the Bronx, the son of Russian Jewish immigrants who worked in the garment district? Harris worked hard to lose his Bronx accent. When asked if he was British, Harris replied, “No, just affected.”

Finally, here are some goodies I found while researching this post:

Jonathan Harris discusses his contentious relationship with the Robot, featuring clips of his patented insults.

Dr. Smith is a stalk of celery in clip from “The Great Vegetable Rebellion.”

Be sure to check out the other blog posts in the Classic TV Villain Blogathon!