Today on the tray: Calzones 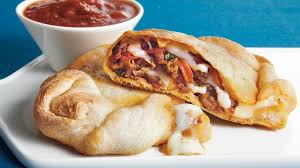 A calzone is an Italian dumpling consisting of an oven-baked folded pizza dough that originated in Naples. A typical calzone is made from salted bread dough, baked in an oven and stuffed with salami or ham, mozzarella, ricotta and Parmesan or pecorino cheese, as well as an egg. Different regional variations on a calzone can often include other ingredients that are normally associated with pizza toppings. (Wikipedia) 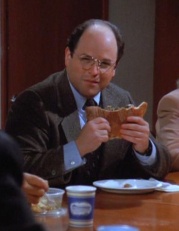 In “The Calzone,” George’s boss, Mr. Steinbrenner, demands a taste of George’s eggplant calzone at a meeting. Steinbrenner is so impressed with the delicacy that he insists George bring him a calzone every day.

So George makes a deal with the Devil—Newman—getting him to agree to pick up the calzones while on his mail route. Newman exacts a high price: a calzone for himself, a slice of pepperoni pizza, a large soda, and three cannolis a week. But then it rains, and Newman refuses to deliver mail in the rain. Next, Kramer gets involved, and you can imagine how well that goes.

Below, watch Steinbrenner get his first taste of eggplant calzone at the start of the episode:

In conclusion: Whether you buy your calzone yourself, or send your employee to get it for you, or bribe your mail carrier, have a happy National Calzone Day!