Today on the tray: Cherry Popsicles, whistles, and Fanny Brice 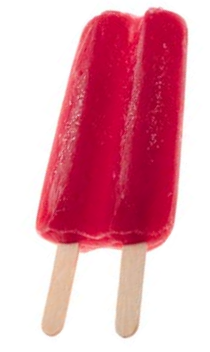 Per Wikipedia, Popsicles were invented by accident in 1905 in Oakland, California (hey, that’s where I live!) by 11-year-old Francis William “Frank” Epperson, “who was mixing a powdered flavoring for soft drinks with water. He accidentally left it on the back porch overnight, with a stirring stick still in it. That night, the temperature dropped below freezing, and the next morning, Epperson discovered the drink had frozen to the stick, inspiring the idea of a fruit-flavored Popsicle.”

I’ve always assumed that cherry Popsicles must have some awful, toxic red dye, but guess what: They don’t! So you can cross that off your list of things to worry about. That’s the good news. The bad news is that you must avoid them when you are prepping for a colonoscopy, per StopColonCancerNow.com.

Anyway, below is a 1950 Popsicle commercial that includes an offer for an almost-free “slide-a-tone ring whistle.” All you have to do is send in three Popsicle wrappers and 10¢ to “Popsicle Pete” at an address that has no zip code (because zip codes hadn’t been invented yet). Better hurry, I bet the offer expires soon. 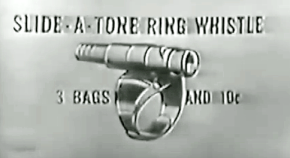 Pitchman Bob LeMond blows the whistle and says “Listen to it: Isn’t that wonderful?” No, Bob, it is not. It’s the most awful, shrill sound you could ever hear. This is the kind of obnoxious toy that parents would hide from their kid and then lie and say it got lost—so be sure to turn down the volume when you listen to this, especially if you’re wearing earbuds.

The ad is actually part of a regular 15-minute show called The Popsicle Parade of Stars. Yes, that was really a thing.

The woman-baby begging for Popsicle bags in the final seconds of the ad is none other than Fanny Brice, playing her popular character, Baby Snooks. Brice was the inspiration for the Broadway musical and film Funny Girl.

Popsicle Parade of Stars was Fanny Brice’s only TV appearance, so it’s a rare entertainment gem. Here’s the entire 15-minute show. And here’s a summary of the episode courtesy of Vintage 45’s Blog:

Fanny [Brice] plays Baby Snooks. She’s out on the town with Daddy. She’s been eating everything in sight and now wants a huge chocolate rabbit she sees in a window. They go inside and it turns into a popsicle commercial. … The next stop is the art museum. Snooks is amazed that Venus doesn’t have any clothes. Then she thinks The Missing Link is her Uncle Louie. The bit ends with Daddy explaining the painting “Circus Maximus” that depicts the Roman arena.

So there it is: Popsicles, whistles, and Fanny Brice, all in one classic TV show. Have a happy National Cherry Popsicle Day!