Today on the tray: Homemade bread 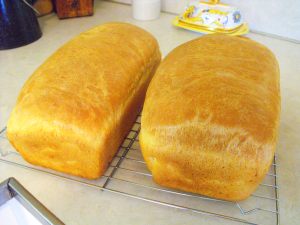 To celebrate this holiday, About.com suggests you bake bread, visit a bakery, or “set up a dramatic play area depicting a bakery.”

I think I’ll do the last one and invite all my friends to come re-enact the homemade bread scene from I Love Lucy. That’s the episode where Ricky and Fred bet that Lucy and Ethel can’t function without the modern conveniences of the 1950s, so the wives set out prove that they can live like people did in the 1890s. While Ethel churns butter, Lucy bakes bread. However, Lucy uses way too much yeast, which results in a gigantic loaf of bread that pins Lucy as it emerges from the oven. (See it below at 02:43.)

From Ultimate I Love Lucy Wikia:

The 8-foot-long loaf of bread was real rye bread made specially for the show by a local bakery. Originally, the script said to use a piece of fake bread, but Lucy insisted on it being real to make the humor more authentic and believeable. So, the real monster loaf was baked, and at the end of the show, all of the audience and cast/crew members were invited to eat the bread.

Next, if we’re not too tired from all that baking and eating, we’ll close our Homemade Bread Day pageant by singing a song by Bread.