Today on the tray: Scrapple

But since I don’t know what scrapple is, I’m writing about Scrabble instead.

Below, a 1990 commercial for Scrabble shows kids, elderly people, and the entire family playing Scrabble together, and no one is accusing anyone else of cheating. That’s right, no one is grabbing the dictionary or coming to blows over whether or not “embiggens” is a word. “It’s Scrabble—America’s good time game!”

Scrabble was also a game show in the ’80s and early ’90s. In this clip, a gay contestant brazenly flirts with host Chuck Woolery, which might not seem like as big a deal now but was pretty daring at the time.  A Logo TV article ranks this at #3 in a list of the Top Great Gay Moments in Game Show History, surpassed only by antics of Charles Nelson Reilly and Paul Lynde. 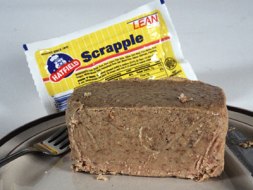 So, back to scrapple: I’ve looked it up, and it turns out that scrapple sounds gross. It’s a mush of pork scraps and trimmings combined with cornmeal and wheat flour and spices. The mush is formed into a semi-solid congealed loaf, and slices of it are then panfried before serving.