Today on the tray: Gumbo. And Gumby. 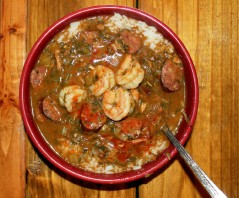 For those who have not had the pleasure of tasting this delightful dish, gumbo is a rich stew usually filled with meat, shellfish, celery, peppers and onions and served over a bed of rice.

A dish that originated out of Louisiana in the 18th century, gumbo has become a staple of New Orleans-esque cuisine and has grown in distinction not just in the southernmost parts of the United States, but the world in general. It is said that gumbo, much like Louisiana in general, is a savory mix of different ingredients that has introduced and blended a culture as a whole. 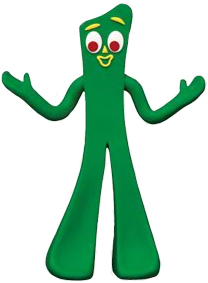 But since spicy food doesn’t agree with me, I’m going to celebrate National Gumby Day instead.

Gumby is a claymation character created by Art Clokey in the 1950s. Gumby, with his pony, Pokey, first appeared on the Howdy Doody Show, and later in The Adventures of Gumby.

According to gumbyworld.com, Gumby was in fact named for gumbo, but not the food. “Gumby’s name comes from what farmers in Michigan used to call the roads during the rainy season before they were paved. At that time all the roads were dirt, and there was a lot of clay in it. The rains turned the dirt into slippery, muddy clay. Art [Clokey]’s father used to call the mud ‘gumbo,’ as in, ‘Well, I went out for a drive to the store and got stuck in the gumbo.'”

Interestingly, gumbyworld.com says that Gumby’s green color was inspired by Clokey’s environmentalism. “One of the reasons for Gumby’s green color is that it represents chlorophyll, which turns light into life. Clay is from the Earth. Art always used to say that Gumby comes from the Earth just as we all do. He believed that we need to protect our environment to provide a livable earth for generations to come.”

Below, in the first episode of The Adventures of Gumby, our green friend beats Neil Armstrong to the moon by more than a decade.

Have a happy National Gumbo and/or Gumby Day!