Today on the tray: A Bicentennial 4th of July picnic 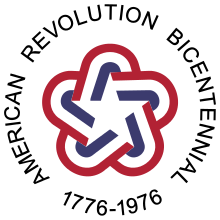 Thirty-nine years ago, on July 4, 1976, the U.S.A. celebrated the its bicentennial anniversary with great fanfare. In 1975 and ’76, evidence of the impending milestone was ubiquitous. Every sort of product packaged itself in Bicentennial-themed artwork. Even fire hydrants were painted red, white, and blue. On television, celebrities delivered 60-second bicentennial history lessons in nightly “Bicentennial Minutes.” (Here’s one starring Jessica Tandy, and here’s a Bicentennial Minute spoof from The Carol Burnett Show.)

If you were alive then, come reminisce—and if you weren’t, see what you missed. Let’s spread out our Bicentennial tablecloth and let the picnic begin!

Are you a bit hazy about the Declaration of Independence and why we celebrate the anniversary of July 4, 1776? Not to worry: This Bicentennial-year Schoolhouse Rock video should bring you up to speed.

Did all that learning make you thirsty? Which would you rather drink—cola or un-cola? Lucky for you, we have both.

First, “Coke Adds Life” to a 1976 Fourth of July parade and festival. It’s lots of fun, with Revolutionary War costumes, Uncle Sam on stilts, Paul Revere, Crispus Attucks, Betsy Ross, and a firehouse dalmatian. They even show someone painting a fire hydrant. The spot ends with fireworks spelling out “Coke Adds Life” in red, white, and blue. If this doesn’t make your chest swell with pride at being an American, I don’t know what will.

Now that you’ve had a moment to wet your whistle, it’s time to join the party. Harry Reasoner is here, hosting The Great American Birthday Party live from “the American Broadcasting Company’s Bicentennial Center in New York City.” At least watch the first minute to experience the fantastic star-spangled set and the funky ’70s opening music. Harry Reasoner’s intro is delightful, as he marvels at the amazing speed of communications in 1976. Twitter would have made his head explode!

“My inclination was to open each of the three hour-long programs we have scheduled by setting off a four-inch firecracker. Cooler heads prevailed: It’s not only illegal, but we couldn’t figure out which union would have jurisdiction.

“That’s one of the things that is different from 200 years ago. Another is that we can sit here like a patriotic spider at the center of a national electronic web and look at things from East Eagle Jaw, Maine, to Falling Arches, Oregon. Two hundred years ago, it took until August for the word of independence to get to Georgia from Philadelphia.”

Have you had enough? Are you nice and full? Good. Now that our picnic is over, we’ll want to clean up.  Fortunately we have our “Summer of ’76 Survival Kit” from Reynolds Wrap to take care of the leftovers.

Have a safe and happy 4th of July!