Today on the tray: Chocolate ice cream and a Brady life lesson 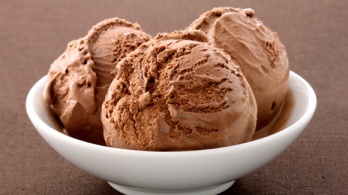 How much do you love chocolate ice cream? Think you could scarf it down fast enough to win an ice-cream-eating contest? Well, that’s what Bobby Brady thought, and [spoiler!] he was wrong.

In the episode titled “The Winner,” the youngest Brady boy feels bad about himself because he’s the only Brady kid who’s never won a trophy. (See, Jan isn’t the only Brady with self-esteem issues.) Ultimately, Bobby decides that his best bet for getting external validation is to enter an ice-cream-eating contest. He loses to a fat kid, which they play for laughs, because it’s always funny to stereotype fat kids as gluttons. Who cares about their self-esteem? 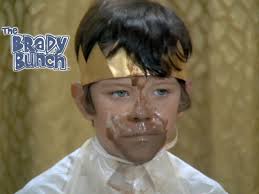 Then Mr. Brady says to Bobby, “You tried your best and you failed miserably. The lesson is, never try.” Oh wait, that was Homer’s advice to Bart and Lisa on The Simpsons. Mike Brady’s advice, given earlier in the episode, was “Find what you do best, and do your best with it.” Well, clearly that didn’t work.

So Carol and Mike take Bobby home, where the rest of the kids and Alice surprise him with a party. They present him with a makeshift trophy reading, “To our brother Bobby, for trying harder than anyone we know. We’re proud of him.” (Betcha didn’t know that the Brady Bunch pioneered the concept of the participation trophy.) But then they thoughtlessly rub his noise in his failure by celebrating with chocolate ice cream, the instrument of his downfall. Talk about irony!

Watch Bobby try and fail in the video below. And remember, everyone’s a winner on National Chocolate Ice Cream Day!