Whose coffee advice do you trust most?

September 29 is National Coffee Day. So let’s take a moment to acknowledge our favorite coffee spokespersons and thank them for their valuable coffee advice over the years. 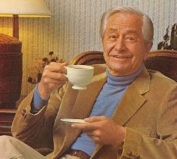 Perhaps the best known coffee personality is Mrs. Olson, played by Virginia Christine. Women seek out Mrs. Olson’s sympathetic ear to complain about their husbands’ insensitive remarks, which always seem to center on the wives’ poor coffee-making ability. Mrs. Olson advises using mountain-grown Folgers coffee, “the richest, most aromatic kind of coffee.” On the surface, it seems like helpful advice, but it still leaves the women believing that they deserve to be treated like dirt unless they learn to make good coffee. Maybe instead, Mrs. Olson should recommend marriage counseling or suggest that the women leave their abusive relationships and discover their own self-worth. Folgers, the coffee most preferred by women with low self-esteem!

MRS. OLSON: Mary, come in! My goodness, you look as if you lost your last friend.

MARY: It’s my Jim again. You should have heard him this morning! “Mary, your coffee is as undrinkable as ever.”… Maybe he’s right. I just can’t seem to make good coffee.

When you were a child, did Margaret Hamilton scare you as the Wicked Witch in The Wizard of Oz? Did every cackle and “my pretty” send a shiver down your spine? Well, you’ll see a much milder Hamilton as Cora, the proprietor of the general store that carries no coffee but Maxwell House. Instead of sinister and shrill, here Hamilton is wise and earthy. And a bad businesswoman. She should at least carry one other brand so people feel like they have a choice. But Cora insists there isn’t room in her small store to carry anything but the best. “I only sell one kind. Maxwell House,” she boasts. “Like they say, ‘Good to the last drop.’” Now give me those ruby slippers!

“One thing about running a country store: You only stock what’s best. Fruit in season. Home-baked pies, when I can get ’em. Even coffee. I only sell one kind. Maxwell House.”

Robert Young knew best on Father Knows Best and played a doctor on Marcus Welby, M.D., so his coffee advice certainly seems trustworthy. Just ask the young couple in the commercial below. Times have changed since Mrs. Olson’s day, and now, it’s not the wife’s poor coffee-making that’s causing problems, it’s the husband’s ineptitude. Poor Don even has trouble folding a map. Don’s wife makes excuses for him: “The doctor says caffeine makes him nervous.” A little Xanax would probably help, but since Robert Young isn’t a real doctor, he prescribes “Sanka brand decaffeinated coffee.” Later, Don’s wife claims that switching Don to Sanka brand helped make their vacation a second honeymoon. Yeah, that’s what happens when a guy’s blood vessels are no longer constricted by caffeine. Young concludes, “Sanka brand: The coffee that lets you be your best.”

Finally, there’s Lauren Bacall for High Point. Like Young, Bacall too drinks decaf, explaining that she doesn’t need the extra caffeine: “I’m active enough, thank you!” Rushing around to make her eight o’clock curtain, she drinks instant decaffeinated coffee in her limo, wearing a fur coat and pearls. Bacall purrs about how much she loves the taste of that crap. She really is very convincing; she deserved all those acting awards she won during her lifetime. When she says “That’s rich!” you truly believe she is referring to the taste, and not making an ironic comment on her own endorsement. But if you’ll permit me to make a pun, I’d say that High Point was a low point in Bacall’s career. Sadly, they stopped making High Point years ago. I do hope she managed to find another instant decaffeinated coffee to keep in her limo and satisfy her “coffee-lover’s taste.”

“You know what makes High Point taste so good? Deep-brewed flavor. I love it!”