Today on the tray: Hot fudge sundaes and a hot mess 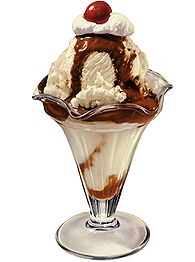 According to the holiday site Punchbowl, “The Guinness Book of World Records has documented several record-setting sundaes. For example, the most expensive sundae can be ordered at Serendipity 3 in New York City for the hefty sum of $1000. In 2009, the Kids Club in Brunswick, Georgia created the world’s longest sundae. It measured over 130 feet long!” That’s one big sundae.

How excited does a hot fudge sundae make you? Excited enough to burst out into the Pointer Sisters song, “I’m So Excited”? In a memorable episode of Saved by the Bell, Jessie, Lisa, and Kelly form a group called Hot Sundae and perform “I’m So Excited” at The Max. For the purpose of this post, I will fanwank that the Hot Sundae they were named for was a hot fudge sundae. There is not a literal sundae, fudge or otherwise, in this episode.

Jessie has a caffeine pill addiction meltdown in “Jessie’s Song,” Saved by the Bell (Nov. 3, 1990)

I hope your hot fudge sundae is more enjoyable than this hot mess of a Hot Sundae. Happy Hot Fudge Sundae Day!