Today on the tray: Meatloaf 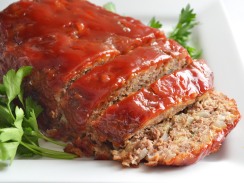 If you’re unclear on what meatloaf is, Wikipedia explains that “Meatloaf is a dish of ground meat mixed with other ingredients, formed into a loaf shape, then baked or smoked. The loaf shape is formed by either cooking it in a loaf pan, or forming it by hand on a flat baking pan. Meatloaf is usually made from ground beef, although lamb, pork, veal, venison, poultry and seafood are also used.”

Where did this idea come from, anyway? Well, CooksIllustrated.com tells us that “the idea of mixing meat with a tenderizing filler traces back to the fourth or fifth century AD, when the Roman cookbook Apicius presented a recipe for patties made of chopped meat, bread, and wine. But it wasn’t until the late 1800s that American meatloaf was born, inspired by recipes offered by manufacturers of the newly invented meat grinder.”

What is a patootie, anyway? Have you always wanted to know but were afraid to ask? I thought it might be a regionalism for “potato,” as in “I’ll have some gravy on my mashed patooties,” but OxfordDictionaries.com says it’s (1) a girlfriend or a pretty girl (“She’s a real hot patootie”) or (2) a person’s or animal’s buttocks (“In his mildly frazzled moments, he might refer to one of his staff as a horse’s patootie”).

Meatloaf history, patooties—this blog is nothing if not educational. However you celebrate, have a terrific National Meatloaf Appreciation Day!