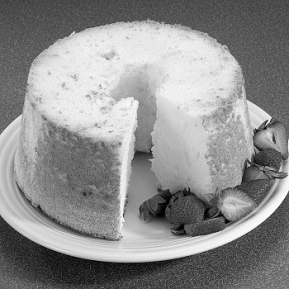 Angel food cake, also called silver cake or cornstarch cake, is a relative of the sponge cake. It’s thought that the light and airy cake was invented by the Pennsylvania Dutch because they were the first to mass produce bakeware, including the specialized pan used to make angel food cake. (CNN Eatocracy)

So what has angel food cake got to do with Bob Hope? Well, just check out this 1955 commercial for Swans Down Angel Food Cake Mix:

VOICEOVER: …And here’s Bob Hope himself to tell you about Swans Down Angel Food. Yes, Bob is waiting in your grocery store. So be sure to look for him and his special Swans Down display.

You’d expect from this that Bob Hope is going to be in the commercial, right? I mean, they just said “Here’s Bob Hope himself.” But if you’re counting on that, you’ll be disappointed. All they show is an illustration of Bob crowning a woman with a halo for having baked an angel food cake. Did the actual, flesh-and-blood Bob Hope get stuck in traffic the day they filmed the commercial? And don’t think Bob Hope is hanging around your local Stop & Shop either—that’s also a lie. (And even less likely now that he’s dead.)

Hope, of course, was well known for his USO performances for U.S. military personnel. “Wherever Bob Hope went, from the deserts of North Africa to Alaska to the jungles of Southeast Asia, he represented home,” says the USO website. “And, for an hour or so, troops were home with an old friend and comrade.” I wonder if he made angel food cake for the troops.

Since we didn’t get to see the real Bob Hope in the commercial, I’m including this clip of his appearance on I Love Lucy performing with Lucy and Ricky. Yeah, Lucy managed to get into the act despite Ricky’s objections—who’d a thunk it? They perform the baseball-themed “Nobody Loves the Ump,” but the best part starts at the 3:00 mark, when they sing a special version of “Thanks for the Memories,” Hope’s signature song.