Who invented the cheeseburger? According to Punchbowl.com, “One story claims that the cheeseburger was created between 1924 and 1926 by a chef named Lionel Sternberger. As the story goes, a homeless man dining at Sternberger’s restaurant in Pasadena, California, suggested the addition of a slice of cheese to his hamburger order. Sternberger complied, eventually added it to his menu, and the rest is history.” So don’t say that homeless people never did anything for you.

In the early seasons of Saturday Night Live, a classic recurring sketch took place at the Olympia Cafe, a  Greek restaurant based on the Billy Goat Tavern in Chicago. The employees (John Belushi, Bill Murray, Laraine Newman) would call out orders for the only three things on the menu. “Cheeseburger – cheeseburger – cheeseburger – Pepsi – Cheeps!” Customers who asked for Coke would be admonished, “No Coke! Pepsi!” 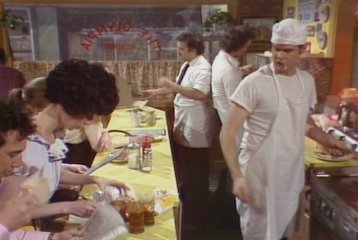